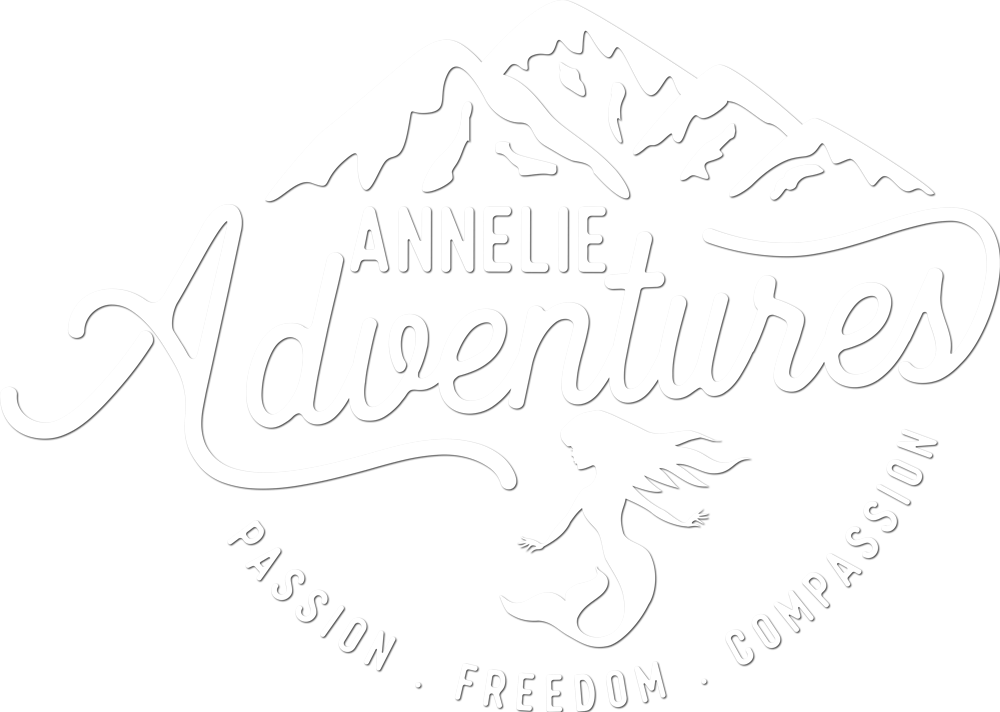 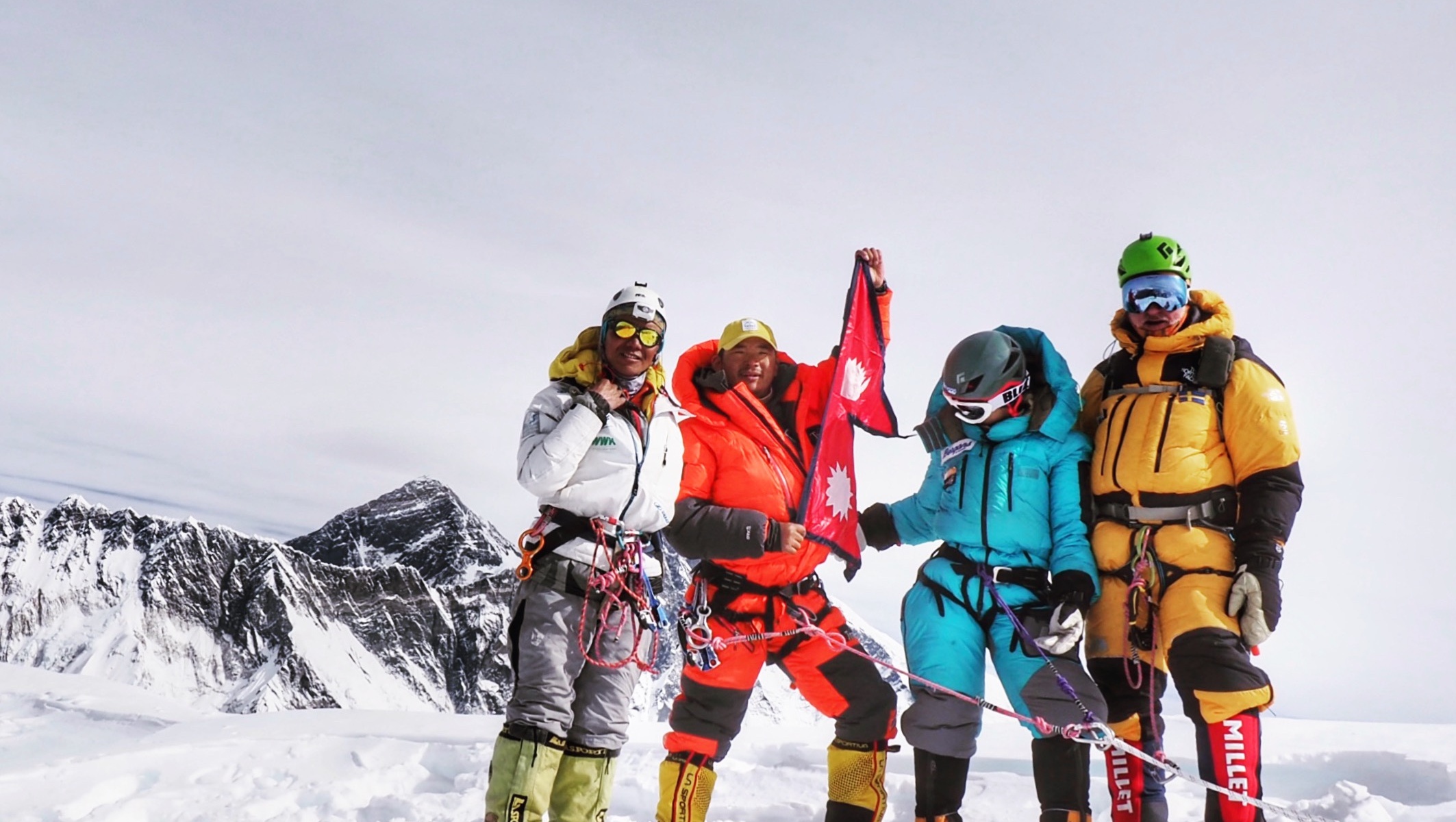 I have fragments of memories from the summit night.
It was very dark and cold.
For most of the time, we were alone, together in the steep terrain.
The beginning and end was the best. Going out of the tent just before midnight to start the climb is beyond excitement. A few hours later I was exerted beyond what I had been in a long time. My body carried a illness and my mind carried thoughts of surrender. When you push your body to the limit, interesting things happen in your mind. I remember leaning my forehead towards the mountain, sensing the smell of snow and ice. With eyes closed I forgot where I was for a moment, and I was back on Everest, just a few kilometers north. I needed to stay until daybreak. Everything gets easier when the light comes. I generally love the summit push at night. Life is simple when all you see is in the light of the headlamp. All you have to do is climb and breathe. I found both hard as my breathing failed.

I’m grateful to know how my body works in high altitude. I know that when it feels like there’s no more energy, I have plenty more. I tried the thought of giving up in my mind and realised it’s not something I can do. As long as I know I have enough energy to get down, I’ll continue.

Ama Dablam is tough. It’s definitely one of the toughest mountains I have met. Partly because I had some weakness in my body, but also because it’s steep. I loved the steep climbing, but not the fact that many didn’t seem prepared for it. I have never before waited in line to climb on a mountain. On Ama Dablam we had to wait for several teams ahead who didn’t seem to have used the jumar before. Learning at 6000m is difficult. In that way Ama Dablam has it’s share of greedy organisations who tells people ‘sure, come to Ama Dablam, you can do it’. They charge them a hefty fee just to see them, give up early or become rescued by a helicopter a few days later. The helicopters and pilots are amazing. We saw then several times every day when there was summit weather. Ama Dablam saw many rescues of unprepared and unexperienced climbers. (If you are interested in climbing Ama Dablam I would say it’s good to do at least another 6000m trekking peak and learn alpine climbing techniques before you head to Ama Dablam. You also need plenty of training before to be in good shape. I would definetly recommend you to climb with Sherpas – it’s half of the fun of climbing in Nepal. They are amazing people. I always climb with one o my best friends Chhiring Dorje Sherpa when he can make it).

The steep rock and ice was my favourite part of the mountain; between camp 1 and 2, yellow tower, grey tower and up over mushroom rock. Then followed the endless steep snowslopes to summit. I mumbled a buddhist prayer Chhiring had taught me. Even as I saw the summit, I thought there would be another slope on the other side. The summit was a relief as much as it was happiness. The first thing I saw apart from the end of the mountain was of course; mount Everest. I’ll forever have a special relationship to Everest summit. It made me cry. Again.

We spent about 20 minutes on the top. I would never have made it without the support of my friends Chhiring, Björn and Mingma.
The way down was very long. It was important to focus. 80% of the accidents happen on the way down.
I slept well in camp 2 even though Chhiring was snoring.
We started at first light and descended to camp 1, then basecamp.
At that point my terrible cough was a fact and I could barely exhale, let alone laugh without tearing my airways apart.  On the other hand, my injured left knee and left shoulder wasn’t complaining at all.

I had a fixation with the fact that Ama Dablam had been ‘calling’ me. I just knew I had to go there, but not why. The search for the ‘why am I here’ obviously wasn’t going to jump out on me. All you have to do is listen without ‘wanting’ something. I got one answer while climbing a steep snow slope. A small voice said ‘I need this in my life’; climbing steep snow slopes that is. I haven’t been any ‘real’ mountains for a long time, trying to reduce my travelling C02 footprint. I need more adventures. Was it that simple a reminder?  On the way down I was also kindly reminded of my helicopter pilot dreams… To be continued. 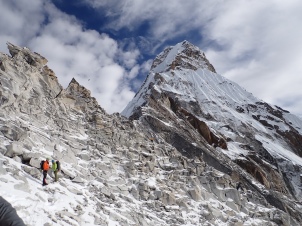 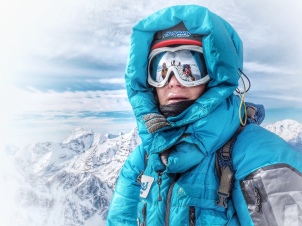 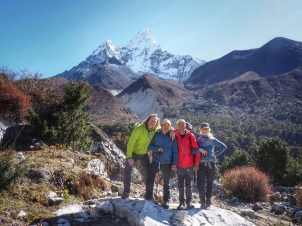 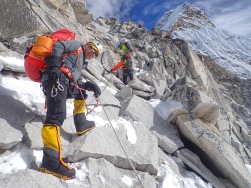 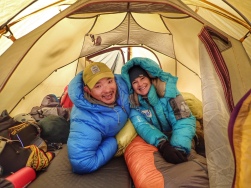 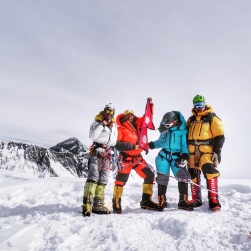 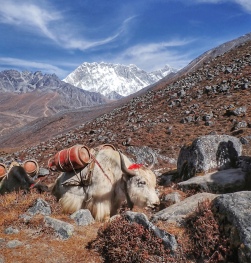 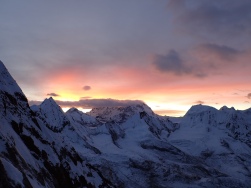 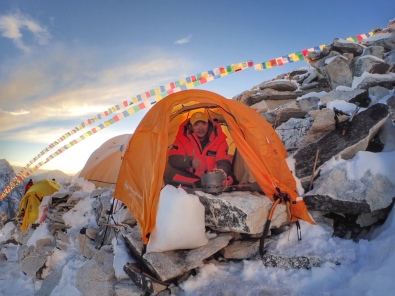 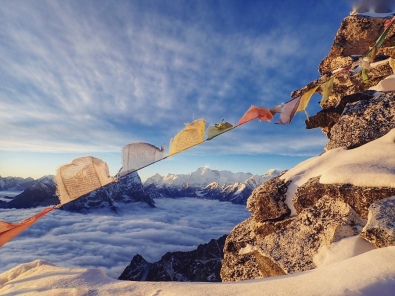